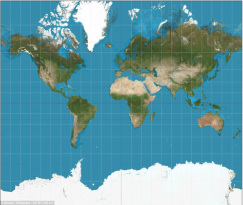 Representing the earth on a flat map is difficult. Many different processes to change a round object into a flat map have been developed. Each type of map projection has certain benefits and certain drawbacks.  One map type is the Mercator Projection (example to the left).  This map is commonly used in classrooms and textbooks.  This map gives an accurate representation of the shapes of the continents, but distorts the size of the continents.  For example, Africa is three times bigger than North America and Mexico is bigger than Alaska, but this map does not visualize this well (Zolfagharifard, 2014).

The type of map projection that a person is familiar with can affect their view of the size of countries and continents.  The use of different projections leads to a distorted view of the world including continents and oceans (Nelson, Aron, Francek, 2008, p. 2).  These misconceptions stem from the "common use of certain map projections which distort and divide the world in ways unfavorable to the accurate perception of the" continents (Nelson, et al., 2008, p. 2). 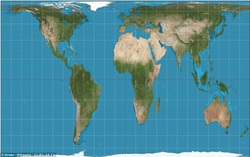 Map makers then decided to create a map that represented the size of the continents to help curb the misconceptions being created. However, this map (called the Gall-Peters projection) has created a flaw in the shape of the continents. As seen to the right, the map "appears stretched horizontally near the poles and vertically near the Equator" (Zolfagharifard, 2014).

Zolfagharifard, E. (2014, May 7). Why every world map you're looking at is WRONG: Africa, China and India are distorted despite access to accurate satellite data. Mail Online. Retrieved July 21, 2014, from http://www.dailymail.co.uk/sciencetech/article-2596783/Why-world-map-youre-looking-WRONG-Africa-China-Mexico-distorted-despite-access-accurate-satellite-data.html